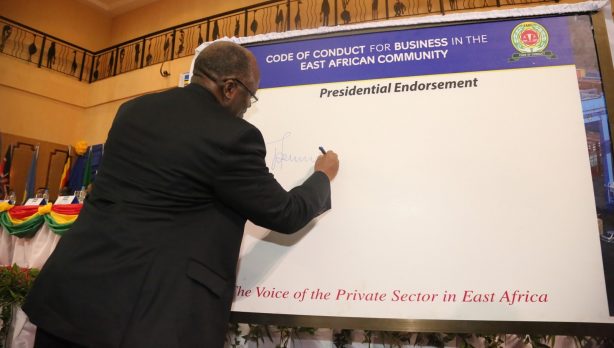 “H.E. Magufuli pioneered the vision of Tanzania ya Viwanda, Standard Gauge Railway, revived Air Tanzania, Julius Nyerere Hydropower among other landmark achievements, that have delivered prosperity to the citizens of the United Republic of Tanzania and the EAC region.”

In his tenure as the Chair of the Summit of EAC Heads of State, President Magufuli launched and endorsed the East African Businesses Code of Conduct, calling for joint efforts in the fight against corruption in the EAC region.

President Magufuli was at the forefront of promoting the socio-economic role of the private sector, an avid advocate for industrialization, infrastructure development and revitalization of the energy sector in the EAC.

“H.E. Dr. Magufuli remains strong in our hearts and it is our duty to follow his great vision of unity, peace and industrialization for the economic growth and prosperity of our beloved East African Community.” said the Council.

East African Business Council said it stands in solidarity with the people and Government of the United Republic of Tanzania during this difficult time.