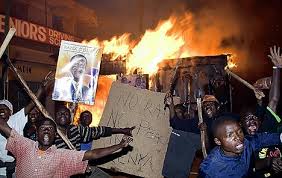 BY CONRAD ONYANGO Increased uptake of political risk covers, burglary, fires and insurance policy on property pushed up written premiums by insurance firms slightly more than 20 percent last year. Stung by previous experience on risks involved in disputed elections, most businesses were compounded to consider taking a cover for their properties. Insurance companies therefore raked in the opportunity, that later became competitive in the sector forcing some firms to introduce customized policies to lure more customers. AMACO Insurance shifted its business focus from motorvehicle insurance policies, terming the segment as overexploited and ventured into providing policies for real estate sector. The firm said there is a huge uptake of its property products as businessmen guard their buildings against looting and perils of fire in the period culminating to this year’s general elections. “We are not prophets of doom, but there is opportunity for business going forward as we foresee a bigger uptake of our property policies,” said AMACO’s marketing manager, Henry Otiso in an interview. The efforts pushed the sectors gross written premiums from Sh 69.2 billion in 2011 to 83.6 billion by the end of third quarter of 2012. The efforts helped grow the firms’ asset base which grew 23.2 percent over the review period from a previous Sh 232.8 billion as at September 2011. According to the 2013 economic survey by national bureau of statistic (KNBS), insurance companies paid Sh 22.4 billion in claims to policy holders, an increase of Sh 3 billion compared to last year’s Sh 19.4 billion under general insurance. Claims in the life business insurance increased marginally from Sh 11.8 billion to Sh 12.6 billion the same period. The bureau further shows legal debts for the insurance firms rose with almost the same margin as premiums. Liabilities amounted to Sh 216.8 billion over the year representing a 20.9 percent, according to the survey. Improved business in the insurance industry spells good tiding for shareholders expecting a rise in dividend payouts when the firms announce financial performance next month. Shareholder funds in the sector surged by Sh20 Billion a 31 percent rise over the year after recording Sh 70.1 billion by September last year. “Shareholders funds comprised of Sh 22.9 billion in paid up share capital while Sh 21.9 billion was in retained earnings and Sh25.6 billion was on reserves,” according to the survey.