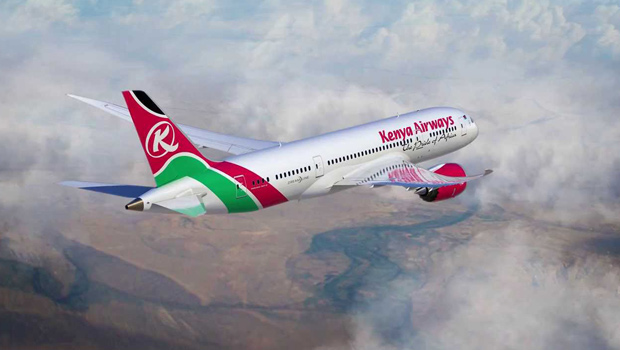 The modern aircraft with state-of-the-art features, whose capacity is 234 passengers, touched down at the airline’s hub at the Jomo Kenyatta International Airport in Nairobi at 1000 hours.

It was flown by Captain Harpal Sokhi from Boeing Corporation’s Assembly Site in Charleston, South Carolina in the US.

Kenya Airways’ outgoing Group Managing Director and CEO Titus Naikuni said: “We are delighted to add yet another Dreamliner to our fleet. This modern aircraft is a big boost to our long haul capability and will replace the B767, which is our current workhorse. Besides enhancing our customer experience, it has lower maintenance costs and high fuel efficiency.”

The new B787 Dreamliner joins four other such aircrafts that are already on Kenya Airways’ fleet. The four aircrafts have already commenced commercial service, flying to Paris in France, Guangzhou in China, Bangkok in Thailand, Entebbe in Uganda, and Kinshasa in the Democratic Republic of Congo, as well as Mombasa.

Dr Naikuni added: “The Dreamliner is our flagship aircraft and a key addition to our fleet under our ongoing fleet renewal programme. It will ultimately contribute towards reducing the average age of our fleet from the current 6.7 years to 4.9 years by April 2016.”

Delivery of the B787 Dreamliner brings to 38 the airline’s total number of aircrafts in active operations. This includes three B777-300ER aircrafts, two of which were delivered this year.

Kenya Airways expects one more new B787 Dreamliner to join its fleet this year. An additional three such aircrafts will be delivered next year.