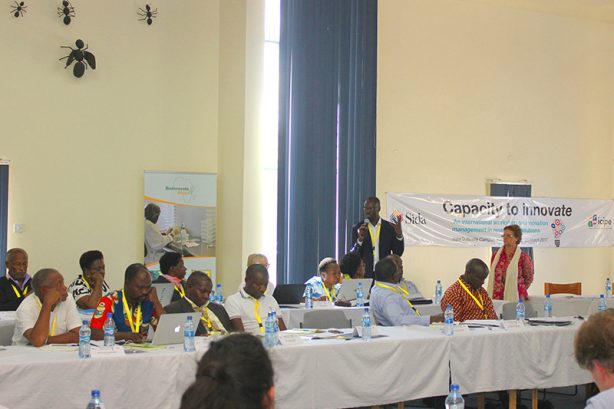 Category: Corporate Comments Off on 11 E.A Bio-scientists win $6 million grant to commercialize ideas A+ / A-

Eleven research teams from Ethiopia, Kenya, Rwanda, Uganda and Tanzania have received grants  totalling US$ 6 million, to enable them turn their innovative ideas and technologies, based on biological sciences, into viable businesses.

The funding has been provided by the Bioresources Innovations Network for Eastern Africa Development (BioInnovate Africa) Programme, a regional initiative currently operational in Burundi, Ethiopia, Kenya, Rwanda, Tanzania and Uganda, with the generous support of the Swedish International Development Cooperation Agency (Sida).

Among the winners of the grants are three innovative technologies and products led by scientists fromMakerere University, Uganda, which include: a technology that will use heat radiation mechanisms to dry and package fruits and vegetables in a manner that preserves natural quality; a proposal to develop agribusinesses by ensuring all-year-round production and processing of insects that are traditionally consumed in Africa, for instance grasshoppers (nsenene) and crickets; an initiative to produce new, conveniently and attractively packaged sorghum and millet products, that can be consumed instantly in various solid forms, or as malted drinks; and strategies to integrate information communication technologies (ICT) in the production and marketing of  tissue culture  sweetpotato vines to increase yields.

Three projects led by researchers from Tanzania have also been selected. They include University of Dar es Salaam researchers, who will scale-up production and commercialisation of a renewable fertilizer that is fortified with nitrogen from biodegradable waste obtained in urban centres. Their counterparts from the Tanzania Institute of Research and Development have been granted funds to avail across Africa a more efficient material (known technically as a substrate), that will significantly enhance smallholder mushroom cultivation.

Kenya-led initiatives include an innovative industrial processing technology by the University of Nairobi, which greatly improves, through time efficiency, reduction of wastage, and reduced environmental pollution, the dehairing of leather and descaling fish, among other procedures. Maize and finger millet varieties, that are resistant to the obnoxious Striga weed, a major challenge in Kenya and Uganda, developed by Maseno University, will also benefit from the funding.

Two scientists from the International Centre of Insect Phyisology will lead the commercialisation of biopesticides developed from fungi, and to promote strategies and technologies that will enable disinfestation of pests from fruits and vegetables from Africa, thereby unlocking access to lucrative overseas markets.

While these teams are led by scientists from the above mentioned institutions, they involve 51 other institutions (over 50% of them private sector companies) distributed in the five countries as project team members or partners.

The 11 winners were announced during a high-level forum on developing a bioeconomy in eastern Africa, held in Kigali, Rwanda, on 3 and 4 November 2017, through a partnership between the country’s National Council for Science and Technology (NCST); icipe, and the Nairobi headquartered BioInnovate Africa programme.