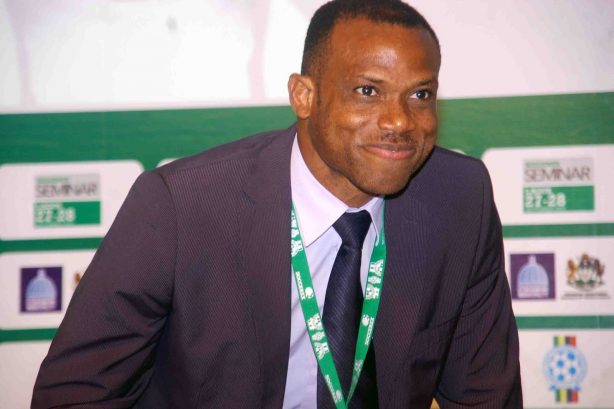 Oliseh won the Olympic gold medal in 1996 with Nigeria and is a Bundesliga winner with Borussia Dortmund in 2001/02. He is also won the Africa Cup of Nations title in 1994.

Olisehalso played for FC Köln and VfL Bochum in the German topflight and recently served as coach of the Nigeria national team ‘Super Eagles’.

Sunday Oliseh will be in Kenya courtesy of StarTimes between 20th and 22nd December to conduct various soccer activities including clinics with various academies in Nairobi in a move aimed at promoting the German football league as well as its official broadcaster in Sub-Saharan Africa, StarTimes.

Importantly, he will be the chief guest during ‘The StarTimes Inter-Media Quiz Challenge’ where the various media houses in the country will be competing for top prizes among them StarTimes flat screen digital television sets.

The ‘Quiz Challenge’ will feature teams of five from the various media houses, testing their knowledge of the German Bundesliga.

In addition, Oliseh will join Kenyan football fans during the live screening of the Bundesliga clash between his old club Borussia Dortmund and Augsburg.

During his tour, Oliseh will also visit LigiNdogo football academy an activity that will see him take kids from various academies through training sessions and present them with soccer merchandise including jerseys and balls.

“We are very happy that Jay Sunday will join the Legends Tour and I believe that Kenyan football fans will enjoy a wonderful week with him shortly before the end of the year,” said StarTimes Vice President Mr. Mark Lisboa.

JörgDaubitzer, Managing Director of DFL Sports Enterprises, the commercial arm of DFL, emphasizes on the importance of the Legends Tour: “With fans all over the world, we have the duty to take the Bundesliga experience out of Germany. Over the last years, activities like the Legends Tour have brought us closer to our supporters, showing them what the Bundesliga stands for. With the StarTimes & Bundesliga Legends Tour we are enabling fans to get close to two of the biggest African Bundesliga stars of all time and to experience our league at first hand.

We see a huge potential for the Bundesliga in Sub-Saharan Africa with its enormous amount of passionate football fans. With the great number of former and current African Bundesliga players we can build on an intense and long-dated relation to the continent. Activities such as the joint Legends Tour with our partnerin the region will help us to further promote the Bundesliga and its wide coverage on StarTimes.

Oliseh left his footprints in Köln, Dortmund and Bochum as rock-solid midfielder and reached ultimate heights when he became Bundesliga champion with Borussia Dortmund in season 2001/02.”

Mr. Lisboa said: “As Bundesligaofficial broadcaster, StarTimes will continue to offer to nearly 10 million subscribers, exciting matches of FC Bayern München, Borussia Dortmund and the other Bundesliga clubs on our sports channels in the coming years.”