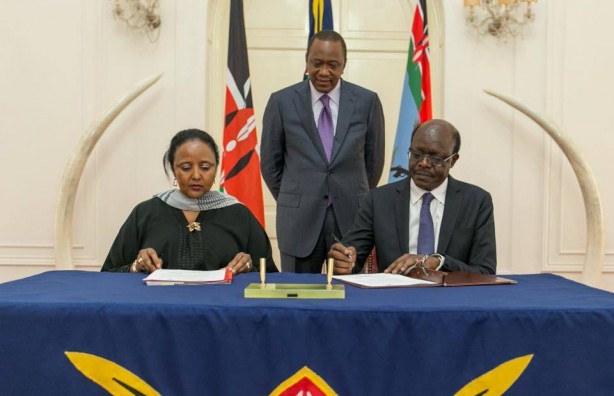 Kenya calls for transparency, compromise as UNCTAD 14 kicks off in Nairobi

Category: News Comments Off on Kenya calls for transparency, compromise as UNCTAD 14 kicks off in Nairobi A+ / A-

Kenyan has called for transparency and a will for compromise to help more than 96 developing nations break their dependence on commodities as World leaders converge in Nairobi for the 14th edition of United Nations conference on trade and development.

The country is expecting a resolution on a negotiated text that outlines the organisation’s programme of work for the next four years.

Similarly the country is expected to present a political declaration that provides guidance for UNCTAD’s future works for adoption by the member states- this declaration will be given a Kenyan name.

President Uhuru Kenyatta said the mandate of the UNCTAD should be strengthened so that it can play a more meaningful role in the implementation of new global agenda that seeks to end poverty and offer greater equality in development.

He called for more commitment by member countries to the UN noting divergent views still stay between implementation of a number of goals that might affect content of the outcome document.

“Constructive engagement transparency, inclusiveness and willingness to compromise will be key for all our success. I remain confidence that this conference will deliver successful outcomes for the global economy and sustainable development,” said Kenyatta.

UN Secretary General, Ban Ki Moon called on deeper cooperation between member states to achieve the sustainable development goals, saying it was key to restore lost hope on global trade and economy that is currently at its all time low.
“We need to restore people’s trust to the global economy. Unctad 14 has vital role to push for implementation of holistic sustainable agenda,” said Moon.

The conference is to address issues such as International Investment Agreements, Sustainable Stock Exchanges, Urban Development and Gender Dialogue at the global investment forum.

While direct investment flows across the globe surged by 40 percent, Africa did not share the rise as foreign direct investments declined by 7 percent, World Investment Report 2016 by the U.N. Commission on Trade and Development reported.

It means Africa is forced to contend with 3 percent benefit of the total worldwide investment.

Approximately 65 percent of developing countries are classified as commodity dependent for two decades now and are hurting from lower commodity prices.

Strong demand for these raw materials, from China in particular, had fueled high prices and rapid growth in developing countries but demand slowed down a decade later and commodity prices fell dramatically.

Trade, Finance and Technology have been highlighted as key to creation of more job opportunities for youth, renew spirit of international engagement between all actors beyond governments to including the poor, rich civil society and philanthropies.

More than 8,000 delegates are already attending the conference with foreign visitors accounting up to 4,600 slots.

More than 70 ministers have already jetted in for the conference, however most heads of states are unable to attend the conference due to clash of the event with that of African Union summit taking place in Kigali Rwanda.

“Not many heads of state had confirmed. The clashing time table has proved a challenge because issues at the summit are heavy,” said Mohammed.

Key Agendas at the AU summit are financing of the union and election of new members- some of heads of states like Uganda are said to be lobbying for top slot.