Why Family Bank CEO plans to quit in six months 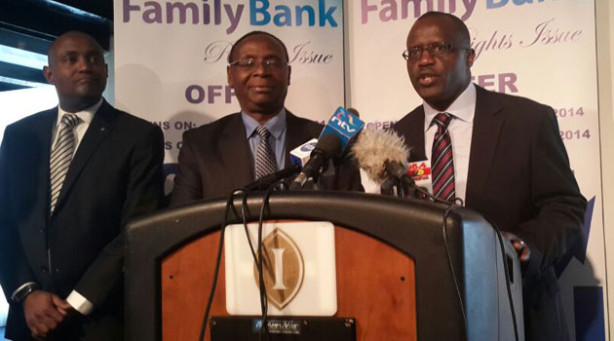 Peter Munyiri has issued a retirement warning as the Chief executive officer of Family Bank two months after seven of the lender’s top managers were suspended over Sh791 million fraud at the National Youth Service (NYS).

He will however continue serving in the same capacity until June, 2016, when his five year tenure comes to a close, the bank said yesterday.

Family Bank Board Chairman, Wilfred Kiboro said Munyiri tendered his notice of opting out yesterday, though he did not say whether Munyiri’s exit was directly linked to alleged involvement of the bank in the multi-million scandal.

Others are branch customer service supervisor Josephine Waira, the platinum manager, the head of the risk and compliance department and Nancy Njambi

CBK is to check for violations to the CBK Act, the Banking Act and the Proceeds of Crime and Money Laundering Act.

Kiboro has however expressed the lenders gratefulness for ‘quality leadership’ offered by Munyiri at the time of his helm.

“Munyiri will continue to serve as the Managing Director and CEO of the bank until then. This will enable the bank to identify a suitable replacement and facilitate a smooth transition period,” said Kiboro .

Munyiri is said to have spearheaded key successful transformation of the Bank that yielded unprecedented financial performance.

During his tenure the bank recorded a five-fold increase in profits – from Sh 502Million in 2011 to Sh 3Billion in 2015 while its assets quadrupled over the same period to Sh 82Billion.

“The five years accorded and the support from our board of Directors has enabled my management team to meet the ambitious targets set by our shareholders. We have demonstrable proof what an indigenous bank can achieve within a short period backed by solid principles and guidance,” said Munyiri

Family bank board has initiated a six month process of picking a successor to further the bank’s ambitious growth trajectory.

Seven Kenyan universities battle it out in farming app challenge