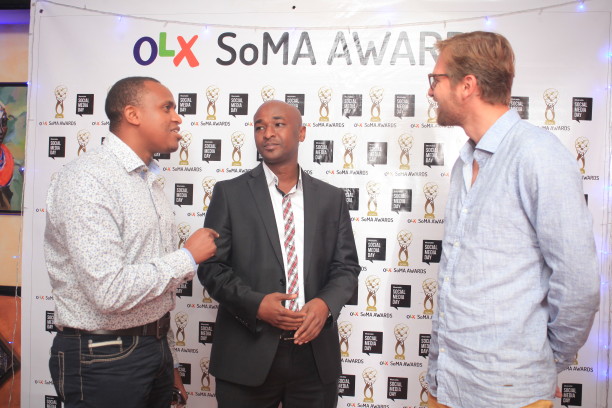 Social media enthusiasts now have a chance to nominate individuals and corporate organisations for this year’s Olx Social Media Awards (Olx SOMA) following the launch of the call for nominations Tuesday evening.

The launch for the call for nominations took place at a colourful cocktail event that coincided with the Social Media Day and was attended by top social media gurus and celebrities in Nairobi.

The Olx SOMA awards, now in its third year, is a platform for celebrating the contribution of social media in the social, economic and political spheres of lives.

The Awards recognise and rewards individuals and organizations that have contributed to the growth of social media.

The Olx SOMA 2015 theme is Social Media and Economic Empowerment and the Awards ceremony will be held in September.

Nominations for the various categories can be entered at www.soma.or.ke by August 1st, 2015.

The nomination categories have been consolidated and new ones introduced to make the annual Awards more relevant and to reflect the tremendous growth in the social media scene.

The new categories include Biz Yangu, which recognizes Below the Pyramid (BoP) businessmen and women who have made good use of social media for economic empowerment and Most Influential Student Leader, which honours a student who has used the platforms effectively for leadership.

Once the nominations are in, a panel of judges composed of distinguished ladies and gentlemen who have made illustrious contributions to the development of social media in the country will select the ones to undergo the voting process.

“Never has there been a time when the social media has been more powerful nor the expectations of its contribution to economic development been higher. In recognizing this, the Olx SOMA 2015 puts out a call to the online community to nominate individuals and corporate organisations who have made invaluable contributions to economic empowerment through the various social media platforms,” said Muli.

“The Olx SOMA 2015 is all about the contribution of social media to economic empowerment and we are looking for social media players who have influenced economic growth,” said Ndiangui.