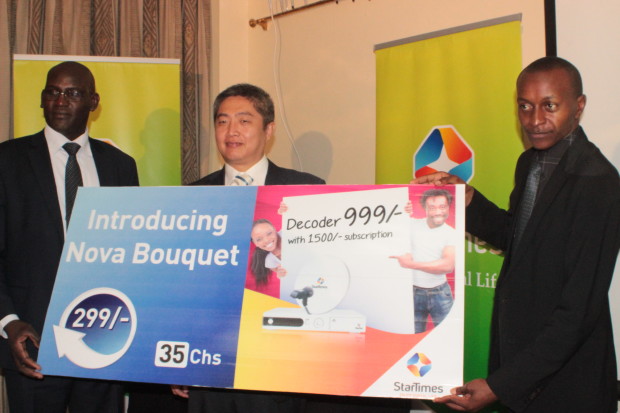 StarTimes Media has revised the product cost and monthly subscription fees for its satellite TV service making it increasingly affordable for Kenyans to access digital television through its satellite service.

Kenyans with existing dish kits can now access the StarTimes satellite TV service by acquiring a full High Definition (HD) decoder at just Sh 999 upon subscribing to a bouquet of choice for Sh 1,500.

A more affordable bouquet to be known as Nova has been unveiled and will be retailing at just Sh 299 with access to over 35 local and international channels.

The company has equally dropped the cost of its Super bouquet which will now be retailing at just Sh 1,799 per month down from Sh 2,499 with access to over 95 local and international channels.

Smart bouquet will now be retailing at Sh 899 per month down from Sh 1,799 with access to over 67 local and international channels. Other bouquets will include Chinese and Indian to retail at Sh 1,799 and 899 respectively.

Upon acquiring the HD decoder at Sh 999 and a Sh 1,500 subscription, customers will be able to enjoy either 5 months of Nova bouquet, 50 days Smart bouquet or 25 days Super bouquet.

StarTimes Sales Director, Anderson Gichuru noted that the company is keen to ensure Kenyans can afford and access digital television both in urban and rural areas especially those which currently have a weak or no digital terrestrial signal.

“Our new satellite television service offer is expected to enable more Kenyans to afford and access digital television no matter their location in the country.” noted Gichuru.

The new Satellite Television policy will also see the price of full installation drop where Kenyans who wish to install the StarTimes Satellite full kit will acquire a Dish, LNB, 20m Cable and accessories at a cost of Sh 2,000.

In addition to the Sh2, 499 HD and initial subscription fees, it brings the total fee to Sh 4,499 representing a 31percent drop from the previous cost of the same which stood at Sh 6,499.